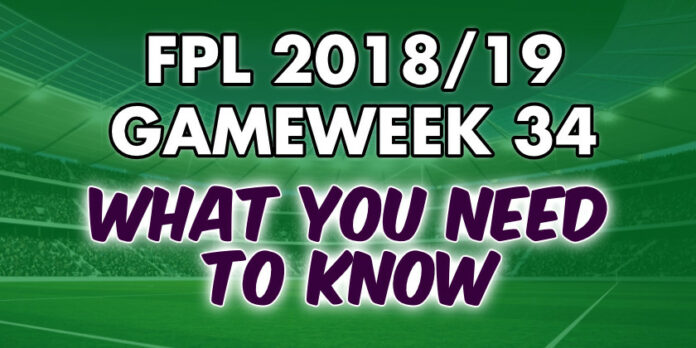 As Gameweek 33 only had 6 fixtures it was unsurprising to see the average points for the gameweek take a dive.

Despite Liverpool being away from home, Sadio Mane was the most transferred in player. He disappointed those who did transfer him in however, after returning just a single point.

The most captained player was always going to be Mohamed Salah. While he did return 6 points, FPL managers will have been disappointed they didn’t go with Eden Hazard at home to West Ham. The Belgian scored twice to return a massive 16 points.

There an array of captains to choose from for Gameweek 34 but with Brighton having two home fixtures, there might not be any need to look further than them.

Attacking wise Glenn Murray is the obvious candidate. While he is by no means prolific, having scored once in the last 7, he does perform better at home. Furthermore, he is on penalties.

Brighton are have been known for their defensive strength with the partnership of Lewis Dunk and Shane Duffy at the back. However, the pair have kept just two clean sheets in the last 11 league fixtures. This is distorted by their comparatively poor away form though. As a result, especially for those who need a differential, a Brighton defender could be the way to go.

Elsewhere, with Harry Kane injured, Heung Min Son will likely assume striker duties (or somewhere close) against bottom of the table Huddersfield. Son has already scored twice at Tottenham’s new stadium and is odds on to add another.

The champions cannot be ignored either. They have already scored 83 goals in the Premier League this season and travel to Crystal Palace in Gameweek 34. Palace beat them in the reverse fixture 3-2.

Sergio Aguero is always an ideal captain but there is a chance Jesus will retain his Premier League starting spot with Man City needing a big performance against Tottenham in the Champions League.

Lots of captains to choose from for Fantasy Premier League Gameweek 34! #FPL pic.twitter.com/xfwoPRIjyl