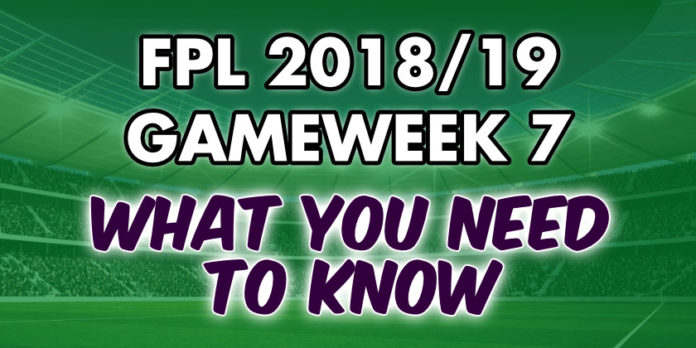 Gameweek 7 falls in between the third round of the League Cup and Matchday 2 of the Champions League. We can look at the lineups from the League Cup to help determine the more likely starters in Gameweek 7. Here are our FPL Gameweek 7 tips. Firstly, we look at fixture difficulty using our FPL cheat sheet, list the players you should be transferring in/out and analyse who the best captain choices are. Fixture difficulty all the way through to Gameweek 15 can be found here: https://www.fantasyfootballpundit.com/fixture-analysis/

Gameweek 6’s average points of 52 was the highest since Gameweek 2.

Here is our Fantasy Premier League Gameweek 7 cheat sheet. As usual we list the percentage chance of each team winning, keeping a clean sheet and the matches most likely goal scorer.

The Gameweek 7 captaincy looks to be primarily between Harry Kane and Sergio Aguero. Both have good fixtures and consequently are odds on to score in their respective games. The Chelsea vs Liverpool fixture dampens both Eden Hazard’s and Mohamed Salah’s captaincy appeal. Elsewhere, due to Man Utd’s form and a good showing from West Ham last week, Romelu Lukaku falls by the wayside for captaincy also. As a result the potential captains we compare are Harry Kane, Pierre Aubameyang, Raheem Sterling and Sergio Aguero.

The likes of Alexandre Lacazette, Eden Hazard and Mohamed Salah miss out.

Gameweek 7 – Transfers In and Out

7 Gameweeks in and the tides are changing in Fantasy Premier League. The players who wouldn’t have been appropriate at the beginning of the season are now clear buys. James Maddison and Jamie Vardy are both looking dangerous and this is timely due to Leicester’s upcoming run of decent fixtures. Arsenal also have good fixtures over, at least, the next four Gameweeks. Pierre Aubameyang and Alexandre Lacazette have started together in each of the last three Premier League matches. In these games not only have Arsenal won but both have contributed a goal or assist. Elsewhere Harry Kane has come back into fashion but it should be noted Tottenham have four away fixtures in the next 6.

Transfers in and out for Gameweek 7…