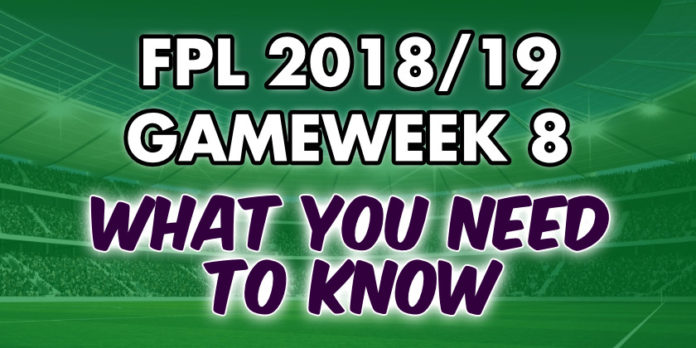 Gameweek 8 precedes another international break to the undoubted annoyance of FPL managers everywhere. With that said though we focus on this week’s Fantasy Premier League. Here are our FPL Gameweek 8 tips. We start off by looking at fixture difficulty. Following that our FPL cheat sheet gives away all the critical odds for Gameweek 8, including each team’s chances of winning, clean sheet likelihood and the matches most likely goal scorer. We then move on to list the players you should be transferring in/out and analyse who the best captain choices are. Fixture difficulty up to Gameweek 15 can be found here: https://www.fantasyfootballpundit.com/fixture-analysis/

The 51 point average return in Gameweek 7 was the second highest since Gameweek 2. Unsurprisingly Sergio Aguero was the most captained player as Man City hosted Brighton. He returned a more than satisfactory 8 points. Following his suspension and an attractive fixture home to Fulham, Richarlison was the most transferred in player. Despite Everton scoring three times however, he was not among the goals or assists.

If you have him the Gameweek 8 captain choice is a clear one, Harry Kane. The odd say he is significantly more likely to score than anyone else in the Premier League this week. The on form Eden Hazard would appear to be the natural second choice. Chelsea do face an away trip to Southampton however, who since the beginning of last season have conceded an average of 1.36 goals a game at home. Just behind him are the likes of Pierre Emerick Aubameyang, Alexandre Lacazette (depending on Europa League), Romelu Lukaku and Jamie Vardy.

Gameweek 8 – Transfers In and Out

The aforementioned Eden Hazard is the most transferred in player ahead of Gameweek 8. This isn’t surprising considering he is currently the top scorer in Fantasy Premier League with 60 points. Chelsea also have decent fixtures coming up. Harry Kane is the second most transferred in. A home fixture against Cardiff will naturally make FPL managers fearful of not owning him. Mohamed Salah is the most transferred out player. A lot of FPL managers will be banking additional funds with a straight swap from Salah to Hazard. The Salah out transfer also facilitates a switch for the second most expensive player, Kane.

Transfers in and out for Gameweek 8…

Marko Arnautovic is on form and can look forward to more favorable fixtures.

Alexandre Lacazette has played the 90 minutes in Arsenal’s last 4 matches, scoring 2 and providing 3 assists in the process.#FPL pic.twitter.com/TfwL4va2G8