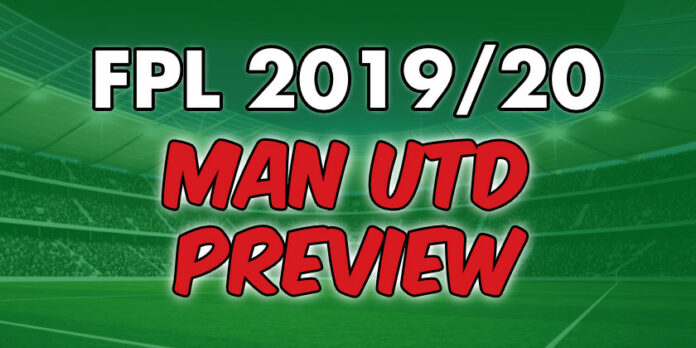 Man Utd players might not have the FPL appeal they once had but there is renewed optimism since Ole Gunnar Solskjaer took over.

Big money signings have been made in defence – Aaron Wan-Bissaka and Harry Maguire – which has been considered United’s weakness for a few seasons now.

A more open philosophy in attack alongside a tightening up of the defence has convinced some Fantasy Premier League managers to invest in Man Utd assets.

One of the most shocking statistics from last season is that Man Utd conceded more than an average of one goal a game at home. Old Trafford isn’t the fortress it once was.

Conceding goals was an issue throughout the season, conceding 54 in total, the most out of the top 10 teams.

Despite their troubles, their away form has been a positive, finishing with the 4th best in the Premier League last season.

United get their season off to a tough start when they face Chelsea, who’ve lost Eden Hazard but still have a strong team, at Old Trafford. Their fixtures don’t improve too much from there, either. According to FDR (FPL’s Fixture Difficulty Rating), United face an average fixture difficulty of 3 (out of 4) throughout their first 6 fixtures.

After Chelsea, they face Wolves (a), Crystal Palace (H), Southampton (a), Leicester (H), and West Ham (a). Wolves could be weakened by the Europa League, although with FPL favourites Diogo Jota and Raul Jimenez, United may be up for a hard match.

Crystal Palace lost Wan-Bissaka and have questions surrounding Zaha, and Southampton is the only team with a “2” difficulty rating United has in that period. Therefore, those may be fixtures to bank on. In Gameweek 5 and 6, Man U face two attack-minded sides that aren’t known for defensive attributes, in Leicester and West Ham.

After that, they play 2 Top 6 sides in their next 3, before their fixtures turn for the better in GW9. 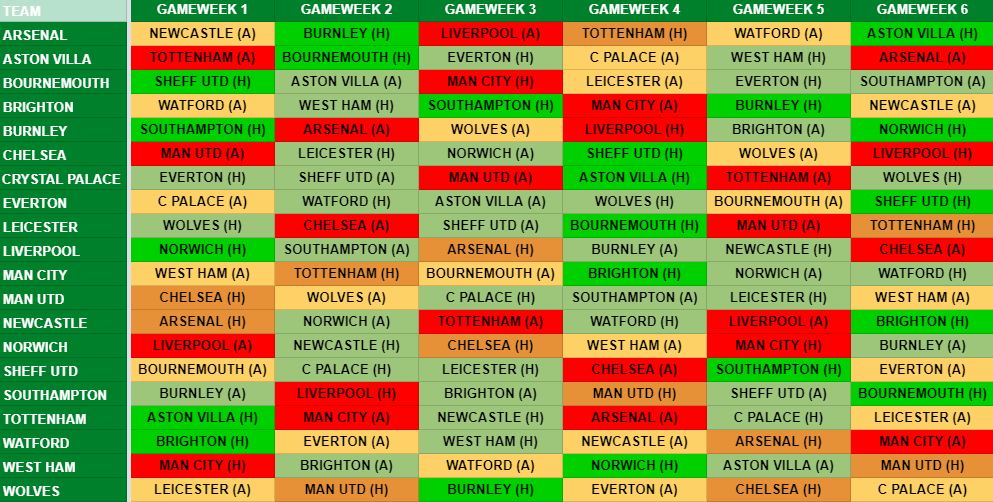 Despite their sub-par start, United still have many options worth considering. Similar to Chelsea and Arsenal, Man U have low-priced assets that could offer exceptional value to FPL managers.

FPL managers will fondly remember when David De Gea was a must-own goalkeeper years back, but this was not the case in 2018/19. During a season where he made many embarrassing errors and his defence struggled, he was largely forgotten.

However, with a defence drastically improved by signings and a new season ahead of him, he could come back, and offer great value at 5.5 million.

2 New United Defensive Assets – But Which One to Pick?

This summer, United completed the signings of right-back Aaron Wan-Bissaka (£5.5m) and center-back Harry Maguire (£5.5m). Both will improve the United defence, but which one should you include in your FPL teams?

FPL Favorite Wan-Bissaka Favored By Many

Most FPL managers prefer Wan-Bissaka. The former Crystal Palace right-back sits in 36.1% of all FPL squads and is the 3rd most owned player overall. This is likely due to managers remembering his status as the best budget defender last season, and one of the best FPL players overall.

The major reason for Wan-Bissaka’s brilliance was his ability to amass bonus points. Among defenders, he came in 8th for bonus points awarded, and 1st in completed tackles. While it was a freak occurrence, his bonus point ability is best illustrated when you see that last January, Crystal Palace lost 2-1 to Watford and Wan-Bissaka still managed to pick up 3 bonus points.

His point totals could further increase at United where he will most likely have a better potential for clean sheets. As we saw in preseason, where he combined well with James and Pogba, he could also increase his assist tally (from 3 last year) at United.

What's the most you'd pay for Aaron Wan-Bissaka now he has signed for Man Utd? ?#FPL

United’s other new signing, Harry Maguire, offers something that Wan-Bissaka doesn’t have – goal threat. Last season, Maguire scored 3 goals, while Wan-Bissaka didn’t score any. Maguire is a huge aerial threat, and whenever there is a set-piece, there is always a chance he can get his head on it and send it into the back of the net.

Maguire picked up a respectable 10 bonus points last year, though his defensive stats were not very impressive. He was not in the top 20 players for blocks, clearances, tackles, or headed clearances. Therefore, it seems that Wan-Bissaka is a better pick for consistent returns aided by his bonus point ability.

Lindelof and Shaw Going Under The Radar?

We talked about the 2 new defensive signings, but what about Lindelof and Shaw? Lindelof (£5.5m) seems the worst option out of all United defenders, carrying no special goal threat or bonus point ability, scoring 1 goal and getting 9 bonus points, the least of all Man U defenders.

Shaw (5.5) is worth more consideration, as, among all Man U defenders, he gets forward the most. Last season, he scored 1 goal and got 6 assists, the 3rd most in the whole team. If you want an uber-differential, Shaw could be an option, but otherwise, Maguire and Wan-Bissaka, who both outscored him last season, are better choices.

No Shortage of Options in United’s Midfield

Despite not being able to bring in the attacking prowess they wanted, United still have many midfielders worth considering for your FPL team. One of the advantages of United’s midfield is that they have options at each major price point, which allows you flexibility in moving players in or out.

Splash The Cash For Pogba?

Pogba (£8.5m) is the most expensive United midfielder and tied for the most expensive United player overall. However, he is priced that way for a reason. He averages 5.1 points per match, the same as Son Heung-Min, and higher than the likes of Fraser, Sigurdsson, Jimenez, Lacazette, and Eriksen. He was the talisman at United, leading the team in both goals and assists.

In addition to this, he has the 3rd best ICT Index (An FPL rating system used to measure a player’s influence, creativity, and threat) in the whole league, behind only Salah and Sterling. Pogba is also on penalties for United, though he did miss a couple last season. In my opinion, he will score the most FPL points of any United attacker.

Martial will most likely be playing as a number 9 for United this year, contrary to his midfielder categorisation. This could mean a huge increase in Martial’s goal tally this year, and with just 5% of managers selecting him, he could be an excellent differential.

He achieved a solid 4.5 Points Per Match last year, the second-best at United, though he had limited minutes. At £7.5m, he is easy to switch with other players like Fraser, Zaha, Moura, Bernardo Silva, and Sigurdsson. For these reasons, I think taking a punt on Martial from the beginning or bringing him in, later on, looks like a good decision.

New signing Daniel James is priced at just £6.0m, and definitely should be under consideration for managers who are looking for players at that price point. James is famous for his speed and could outrun any defender to get on the end of a through ball.

However, there is a possibility that James won’t start or get as many minutes as we anticipate. I think he is a “wait-and-see”, although as aforementioned if you are looking at that price point he is a decent option.

Many FPL managers (15.6% TSB) have included Greenwood in their squads as the £4.5m bench fodder of choice. While Ole Gunnar Solskjaer has indicated that the 17-year-old will play some part, it is unlikely that he will start, or even come off the bench too frequently.

Due to this possibility, his large amount of owners may sell him en masse, prompting his price to drop and the value of your team to decrease. Therefore, I’d recommend lesser owned 4.5 forwards such as Wickham or Martinelli.

Marcus Rashford is owned by a surprising 17.2% of managers and is the only other Man United player priced at £8.5m. However, I don’t think he is worth it at that price. For .5 million less, you could get Wilson, or for .5 million more, you could get Vardy, both players I think will outperform Rashford.

If you’d like a United player and think they will do well, it makes more sense to go for Martial, who is playing out of position as a striker and is less money, or even Pogba at the same price, who had a better points per match and ICT Index than Rashford.