Are the most picked teams important?

The most picked teams are significant for a number of reasons. They indicate the overall team preference of FPL managers, whether there is an opportunity to rely on a less picked team and show whether a team is over or under priced. As of today we have a definitive list of the most picked teams ranked one through 20. 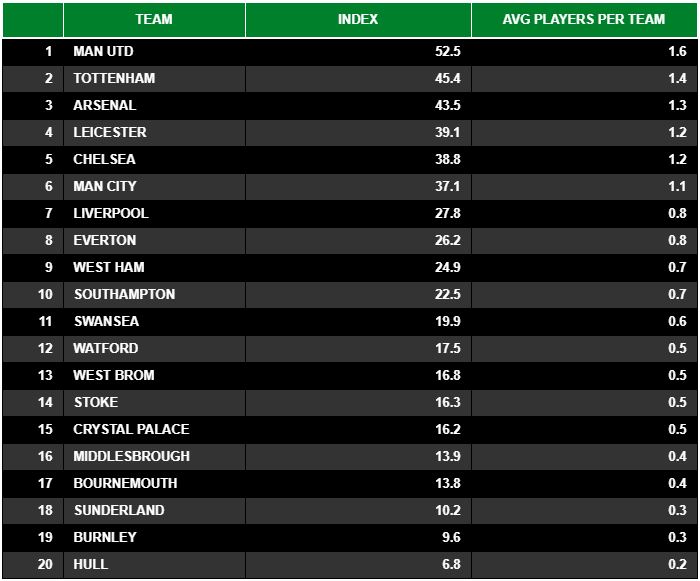 What does this mean?

There are several key takeaways we can draw from this data – these include:

Under and Over Priced Players

This is notable information that should be taken into account. There are however additional reasons behind these takeaways. It is possible Man Utd have under priced players which have resulted in their high pick percentage. Equally Man City, a team that would be expected to be popular among top picks, may have over priced players. The fact they have five midfielders priced over £8.0m and Aguero at £13.0m would certainly provide evidence of this.

Regarding the high Leicester picks and the popularity of Kante, a lot of FPL managers may be looking through the glasses of last season. It is hard to believe Leicester will repeat anywhere near only conceding 36 goals again this season. This is because they do not have the depth of squad defensively nor the quality to warrant their highly picked defenders. Mahrez and Vardy are both respectable picks because if they get close to anywhere near last season’s points haul they will be well worth the money. Furthermore, Musa is also a solid pick as it appears he fits perfectly into Leicester’s counter attacking tactics and is only £7.5m.

Kante, another reason Leciester may struggle defensively, probably had the best season he will ever have for fantasy points.  Even with this total he only scored 108 points. As a result of this, and his £5.0m price tag, it appears that FPL managers haven’t been able to pass up on him. He will be expected to play more of a defensive role in the Chelsea team and consequently will have less opportunity to find those quick through balls as teams will sit back against them. Due to this we estimate he will get between 80 to 110 points which doesn’t necessarily make him a bad pick but there will certainly be better returns elsewhere.

Finally, if we analyse the relatively low Liverpool picks we can see this can be put down to three reasons. First and foremost, Liverpool start with some difficult fixtures. In addition to this Liverpool have no cheap options who have the potential for a big points tally, all their big players are priced in the medium to high range. Lastly, and most notably, unlike other teams they do not have a predictable starting 11. There are 11 players who can realistically fill the 6 midfield/forward slots going into the opening game of the season.