The Wildcard is arguably the most useful and interesting chip in Fantasy Premier League. Homing in on the right time to Wildcard is critical as it has the ability to shape your FPL season for better or for worse.

The Wildcard is used as a get-out-of-jail chip by several managers. However, if the start of the season has been great for you, you can still use it ascend the ranks.

So, what are the factors that must be taken into account while deciding the time to use your first FPL Wildcard of the season?

A Wildcard becomes necessary in situations such as:

An important point to note: The aim of a Wildcard should be to set up your team for the long run and to minimize transfers required.

Ideally, you should be able to spend the next two Gameweeks after wildcard without needing to make a transfer. Naturally there are unforseen circumstances but this should be the goal.

Last season, Yavuz Kabuk (the only manager to have 7 consecutive top 10k finishes in FPL) had a gap of 30 Gameweeks between his wildcards. Thus, creating a good team structure with the chip is essential.

There are two Wildcard Chips to use in the 2021/22 Fantasy Premier League season. The deadlines for each of them are as follows:

This is applicable throughout the season. Meaning, if your team has several unavailable or injured players and a non-playing bench at any point in the season, you should use your wildcard to get control of the situation.

GW4 looks to be a good candidate for a Wildcard mostly due to fixture swings for multiple teams. There is also the fact the many important players can miss out of GW4 and even GW5 due to quarantine guidelines against red-listed countries.

Examples of such players include Mohamed Salah, Raphinha, Edinson Cavani, Said Benrahma, Emi Martinez, Raul Jimenez and Richarlison. A GW4 wildcard can get you out of this situation, if the worst happens.

A Wildcard next week can also help you catch the price rises of premiums such as Romelu Lukaku, Harry Kane and Heung Min Son. There will be a lot of price rises at the beginning of the season and an early wildcard can help you build a good team value. 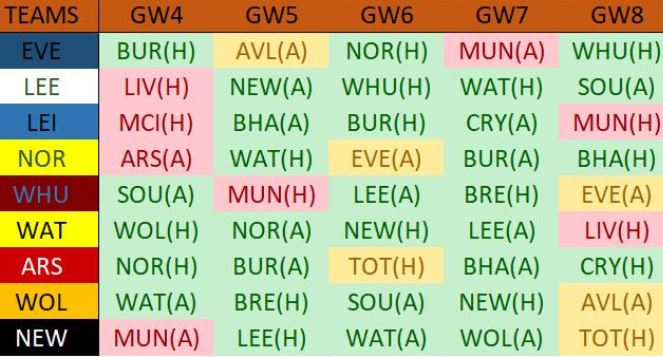 A GW7 Wildcard might be attractive to a lot of FPL managers. However, activating the chip a week later is advised. This is mainly due to an International Break after GW7. There might be possibility of injuries or unavailability of multiple players.

A lot of teams will enjoy a favourable fixture swings such as Chelsea, Man City, Aston Villa, Southhampton, Arsenal and Burnley. Your players to target during this time should be from these teams.

A wildcard this Gameweek will also give you an opportunity to remove players from several teams whose fixtures turn sour. These teams include Man Utd, Tottenham, Brentford, Brighton, Newcastle, Everton, West Ham and Watford.

The downside to waiting for GW8, and not GW7, is you might miss out on some price rises – namely Chelsea players.

GW12 is another appealing Wildcard candidate for the same reasons as GW8. The previous Gameweek has another International Break which throws the availability status of several players into question. The chip at this stage can help you bounce back if the situation becomes difficult to navigate.

The good news is that teams such as Man Utd, Tottenham, Liverpool, Leicester, Brighton, Manchester City and Newcastle face a stretch of good fixtures from this point.

Considering all the options along with their pros and cons, GW8 seems like the best time to use that first FPL Wildcard.

That Gameweek sees a lot of fixture swings (good and bad) for around 14 teams. Thus, capitalizing on this with your Wildcard can potentially pay dividends for your FPL rank.

Outside of all these, you can just leave your Wildcard until the GW20 deadline. That way you minimise the time you need to set up your team before the big Double Gameweek in GW35.