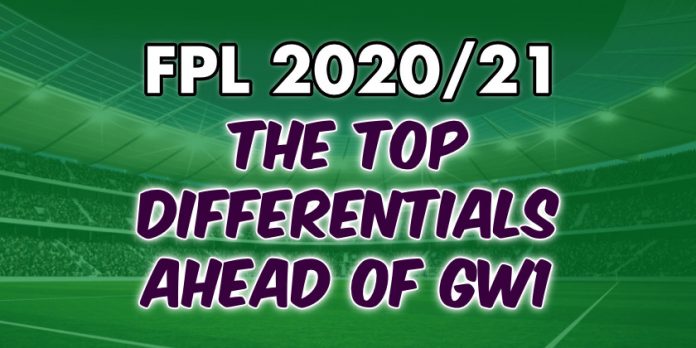 Differentials in Fantasy Premier League are essential to gain an advantage over other FPL managers. Here our top FPL differential picks ahead of GW1 in the 2020/21 season.

For the sake of clarity, we will define any player with a selection percentage of 10% or less as a differential. They are given this name because picking them is the best way to make a difference to your overall rank.

This can of course work both ways as differential selections often incur heightened risks. That is why they aren’t owned by a lot of managers in the first place.

Sometimes there are some gems hiding in the rough, however. Here’s some you should consider ahead of Gameweek 1.

Rashford was the 13th highest scoring FPL player in the 2019/20 season with 177 points. He has now been reclassified from a forward to a midfielder as well, priced at £9.5m.

Despite this, he is picked by less than 6% of Fantasy Premier League managers. This low pick percentage may be somewhat explained by Man Utd having a blank in Gameweek 1 but nonetheless it is surprisingly low.

Bonus point calculations aside, he would have scored close to 200 in his new midfield classification.

The 22 year old was involved in 25 Premier League goals last season. That was his best return so far, comfortably eclipsing the 17 from the year before.

If Rashford is indeed still improving and performs in a similar vain, then it is understandable why some managers will be optimistic of another great season.

Best points per million from last season’s FPL (based on this season’s prices):

Sterling falls in the same boat as Rashford whereby he has a blank in Gameweek 1. That is why there will be reluctance to include off the bat. After all, £11.5m is a lot of money to part ways with for a player that won’t be playing.

Sterling has proven to be a fantastic investment for FPL managers over the last three seasons. Him and Mohamed Salah are the only two players that have returned 200+ points in those seasons.

Many FPL managers will be planning an early wildcard and there’s little doubt Sterling will be on the radar.

The 25 year old started 33 of the 36 Premier League games he was available for, too. Given Pep Guardiola’s notorious rotation, this is another big tick for the £11.5m man.

There doesn’t seem to be too much discussion about Zaha in the FPL community at the moment. That could because he scored just 120 points last season with 4 goals and 6 assists.

Let’s not forget he did score 10 and assist 11 in the previous season, though. Crystal Palace also start the season with some relatively good fixtures, although he may need benching away to Man Utd and Chelsea.

However, his on-going transfer saga is noteworthy. This is hardly ideal when considering options for your FPL team.

Regardless, he will be expected to start in GW1 should nothing materialise beforehand. Everton are favorites to sign him and given Palace scored the fewest league goals of any current Premier League side, this may only make him more appealing.

Let’s just call it as it is – Aubameyang as a midfielder is a terrible decision from FPL.

Starting £4.0m defenders in Fantasy Premier League are gold dust. They are few and far between so when one does come up FPL managers rightfully pay attention.

Mitchell could be one of them. He started the final two league games of last season and has started the latest three pre-season friendlies.

An additional reason to consider the 21 year old is Palace’s defensive record. Among teams that finished in the bottom half, they actually conceded the fewest goals.

Palace’s regular left-back, Patrick van Aanholt, is out with a dislocated shoulder and there is currently no news on when he is expected to return.

The ever-present Chelsea wing-back is the only defender in Fantasy Premier League to have produced 6 assists in each of the last three seasons. He did this barely, with exactly 6 in each of them, but nevertheless it is still impressive.

He will likely start the season, as he is seemingly higher in the pecking order than Reece James and Marcos Alonso. When Ben Chilwell returns though, his appeal may lessen when he directly competing with James for the right-back slot.

The Spaniard only kept 8 clean sheets last season which is a lot less than the 15+ he did in each of the three seasons before that. There are still questions over Chelsea’s defence but should Azpilicueta remain a certain starter he pay dividends at just £6.0m.