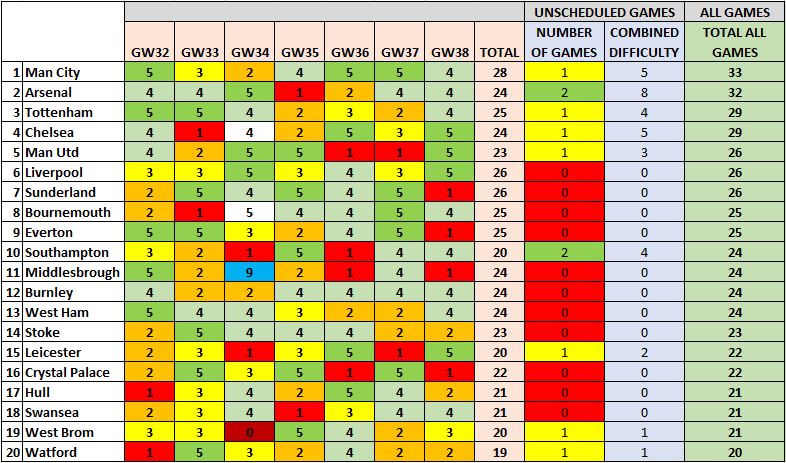 To coin a phrase from a famous manager, we are getting towards squeaky bum time in Fantasy Premier League. With just 9 Gameweeks remaining FPL managers can ill afford any slip ups or wasteful decisions. Therefore we’re going to look at the fixtures difficulty from here until the end of the season. This will include looking at the Fantasy Premier League fixtures that fall in a Double Gameweek, providing a ranking of the teams with the best fixtures remaining all whilst taking into account the number of games.

The easiest and most simplistic way to gain an advantage is to look at each team’s number of remaining Fantasy Premier League fixtures. The teams with the fewest number of fixtures have 9 remaining while the teams with the most have 11. Those with 11 include Man Utd, Arsenal and Southampton. The teams with 10 fixtures remaining are Chelsea, Tottenham, Man City, Watford, Leicester, Crystal Palace, Middlesbrough and Sunderland. The remaining 9 teams all have 9 fixtures left.

The below table shows the difficulty of each team’s fixtures for the remainder of the season. This table was updated on 05/04.

What Does This Mean?

The table above shows a difficulty rating for each team’s fixtures based on their currently scheduled games, their unscheduled games and both combined. Every team’s fixture in a given Gameweek is given a rating between 1 and 5. 1 represents the hardest whilst 5 represents the easiest, hence the respective red and green. To provide an example of each, playing Chelsea Away would result in a 1 and Swansea at Home would result in a 5. These ratings across all the remaining Gameweeks are then totaled to give an overall difficulty rating – the higher the number the easier a team’s remaining fixtures. In Gameweek 34 there are three cells which are filled in blue and one brown; respectively these represent a Double Gameweek and Blank Gameweek.

Which Team Has The Best Fixtures Then?

When taking all remaining fixtures into account, Arsenal and Tottenham come out on top with a score of 37. This is followed by Chelsea, Man Utd, Man City and Liverpool who range between 36 and 34. Southampton also score 34 but it should be noted that, much like Arsenal, they have more remaining games than anyone else. At the other end of the table Crystal Palace and West Brom both have a score of 25. Swansea, Everton and Bournemouth follow these with a score of 28. Other than Crystal Palace (who have 10) these four teams only have the minimum 9 games left. On a shorter term basis, from now up until Gameweek 34, Arsenal, Tottenham, Liverpool, Man Utd and Middlesbrough provide the best fixtures. Man Utd and Middlesbrough both have a Double Gameweek in Gameweek 34.

Whilst this table is an excellent indicator to go by when preparing for the rest of the season, there are some assumptions and weaknesses within it. Firstly, the ratings used are the opinion of Fantasy Football Pundit. Naturally it is possible others would rate the fixtures differently. Secondly, the top teams, on occasion, have received a higher fixture rating for the same fixture in comparison to lesser teams. For example, Man Utd at home to Stoke would be rated a 5 whilst Burnley at home to Stoke would be rated a 4. This system has been used as we feel it highlights the top teams advantage in the same fixture which therefore gives more accurate fixture difficulty ratings.

Whether or not you have your second FPL Wildcard chip remaining will dictate whether you take a shorter or longer term approach. You can read more about Wildcard Strategy here. If you don’t have your Wildcard chip then you’ll need to look at the remaining fixtures as a whole rather than thinking about the next few Gameweeks and then wildcarding. Tottenham provide the best fixtures difficulty rating and satisfy both short and long term criteria. Arsenal share Tottenham’s fixtures difficulty rating score and also have an extra game so bringing in their players are imperative. Beyond that, if you focus your FPL team around the top 6 you should be in a good position from now until the end of the season. 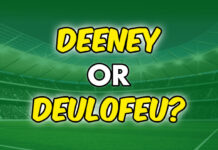 Deulofeu Is a Popular FPL Pick but Is Deeney Being Overlooked? 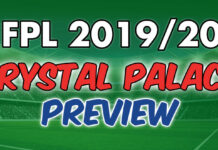 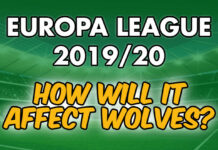 How Will Wolves be Affected by the Europa League? 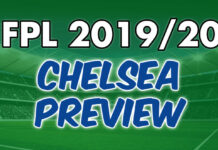