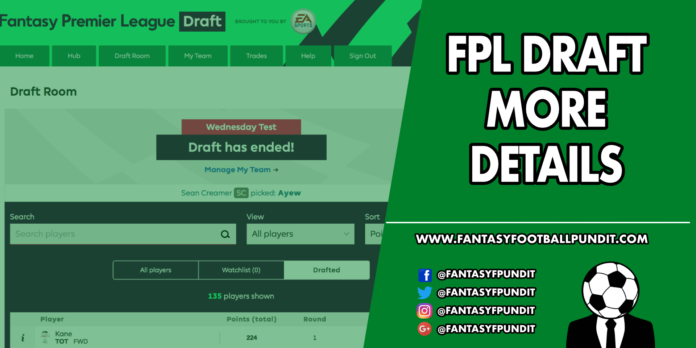 The new FPL Draft mode was announced earlier this week on 5th July. The initial announcement got the Fantasy Football community buzzing with anticipation. However, FPL Draft details remained relatively sparse. That is until today where further FPL Draft details have been revealed.

What is FPL Draft?

For those who missed it here is a brief summary of what the FPL Draft will entail. The Draft is a type of Fantasy Football where each player can only be picked once in a given league. This is in direct contrast to the normal Fantasy Premier League game where players can be picked by multiple teams within the same league. Essentially each player in the Premier League can only be selected once in any league. You can read our full article which explains the basics of the FPL Draft here: https://www.fantasyfootballpundit.com/fpl-draft/

The most common questions about FPL Draft since its announcement have been regarding how the draft will work, what happens if you miss it and how, and if, transfers will take place. Fantasy Premier League now have answers to all of these which we will share below.

Firstly, the player to receive the first pick is determined randomly. Therefore, if you have a league of 8 then you will have a 1 in 8 chance of getting the first pick. The second, third and so forth pick will also be completely random. Initially, it may appear it is a big disadvantage to be picked last, and whilst this is arguably true, you can also argue it may be an advantage. If you get the first pick in an 8 team league then you will get the 1st and 16th picks. If you get selected last to pick then you will get the 8th and 9th picks. This is referred to as a snake draft system. Depending upon the players selected and the size of your league some players may prefer to get their first pick last. 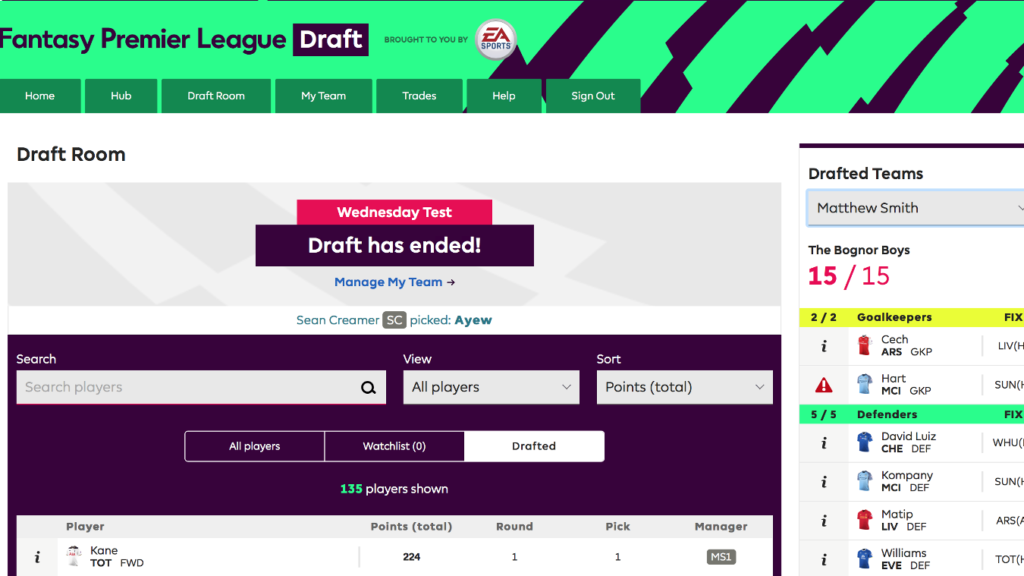 It has already been announced that the scoring system for FPL Draft will be the same as the traditional FPL game. The only difference will be that an FPL Draft squad does not have a captain or vice-captain.

There are two ways to make transfers in the FPL Draft. Firstly, you can make a direct transfer with a player who is in the free agents pool. The second method, which is a little more complicated, is the waiver system. This is for new signings to the Premier League or players released by other managers.

The free agent transfers are the more simple of the two transfer methods for FPL Draft. Any player that wasn’t selected can be transferred in for a player in your squad in the same position. This must take place prior to 24 hours to the Gameweek deadline. It should also be noted that direct transfers cannot take place between managers.

As mentioned above waivers are used for new signings to the Premier League or players released by other managers. Managers will need to put in waiver requests to be able to transfer in these players. Before the season starts the waiver order will be the reverse of the draft order. From that point onward it will be the lowest ranked team that receives waiver priority. If you request more than one waiver you will need to prioritise them whereby the less prioritised ones will go to the back of the queue. Waivers will run on a Game-weekly basis.

What if I miss the FPL Draft?

If you miss, or are unable to make, the FPL Draft there is a contingency plan in place. Before the draft takes place, each manager can create a wishlist of players and prioritise them. Any absentees, be it for the duration of the draft or just part of it, will see their wishlist kick in in an effort to get them the players they desired. If no wishlist is selected then FPL will determine the selections automatically based upon draft ranks. The draft ranks are determined by a manager’s total points from last season.